India celebrates its 75th Independence Day as ‘Azadi Ka Amrit Mahotshav’ to commemorate its freedom. 15th August 2022. The 75th Independence Day was celebrated with due respect at Vivekananda Kendra Vidyalaya, Lambaline, Port Blair. The School was decorated with colourful festoons and fenced with seating arrangements. Students, staff members, and parents were present for the occasion.

Shri S.Vijayakumar, the principal of the school hoisted the National flag. With due solemnity, the national anthem was sung. The students saluted the flag with the flag song. Palak Biswas of class IV A,  spoke on the significance of the day.
The students of the primary wing sang the Patriotic song that awakened everyone’s feelings toward our Mother Land. Nandini Verma ( Class VII) spoke on the importance of the day. 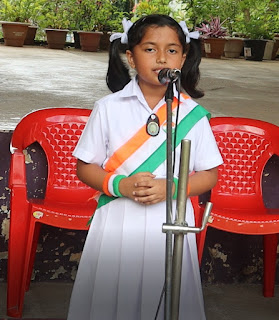 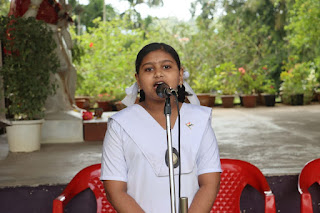 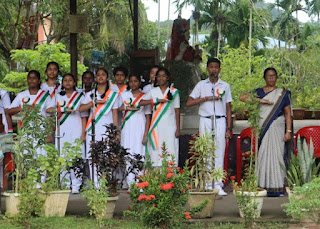 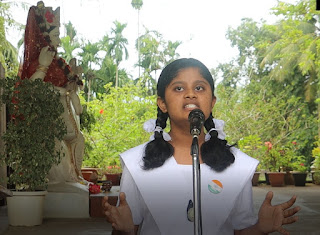 Ganesh Mishra of class VII through the patriotic song Desh mere insisted that nothing in this world is more important than motherland. The value and the greatness of the motherland were presented through the song Hey janma bhumi Bharat sung by the senior secondary wing students. 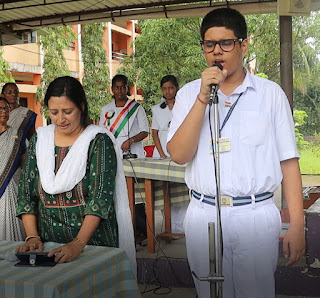 While addressing the audience Sri S.Vijayakumar the Principal of the school, paid tribute to the martyrs who sacrificed their lives for the cause of freedom. He focused on the contribution and sacrifice of the freedom fighters. He reminded the younger generation's responsibility to the Nation by quoting many great patriots' lives. 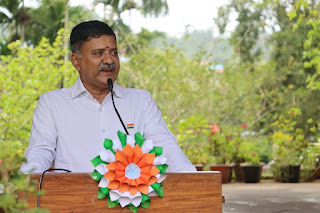 The Programme concluded with the Shanti mantra. Sweets were distributed to all at the end of the program.

Matru Pooja was organized in Vivekananda Kendra Vidyalaya, Port Blair for the students of Class X on 20th April 2022. Students of class X attended the same with their parents. Students of Class IX welcomed them in traditional manner. As per the instruction, all participants washed their Mothers feet and applied Chandan and Kumkum. 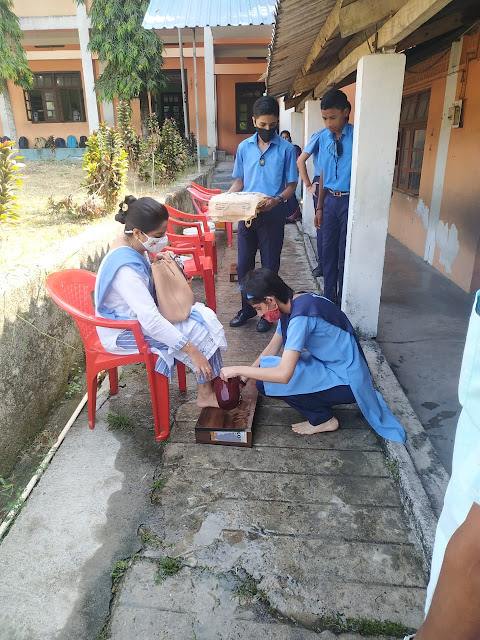 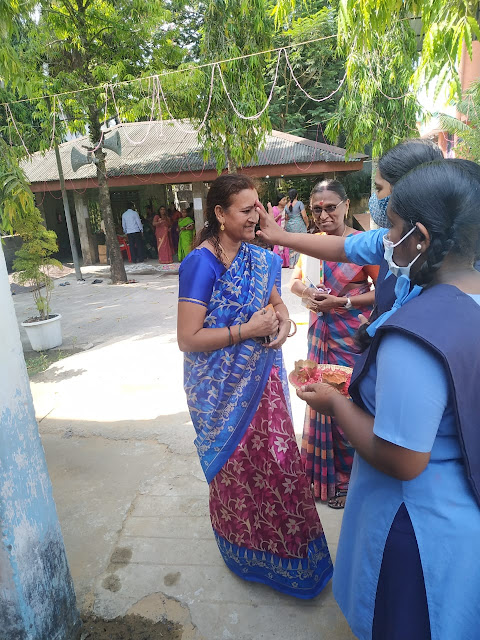 The pooja was conducted by offering flowers and chanting the sacred mantras. The students worshipped their mother and took their blessings. 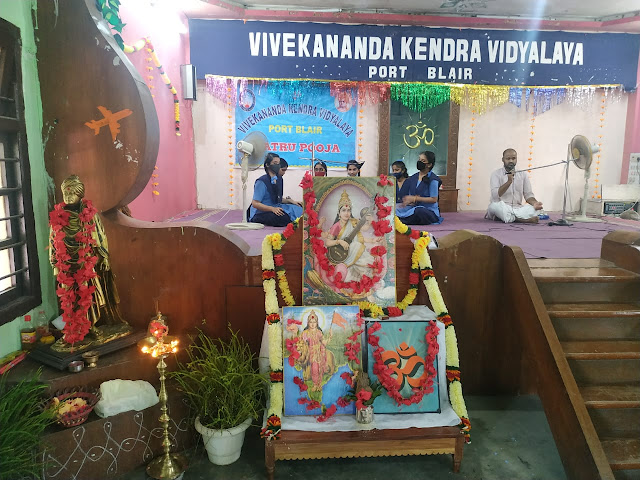 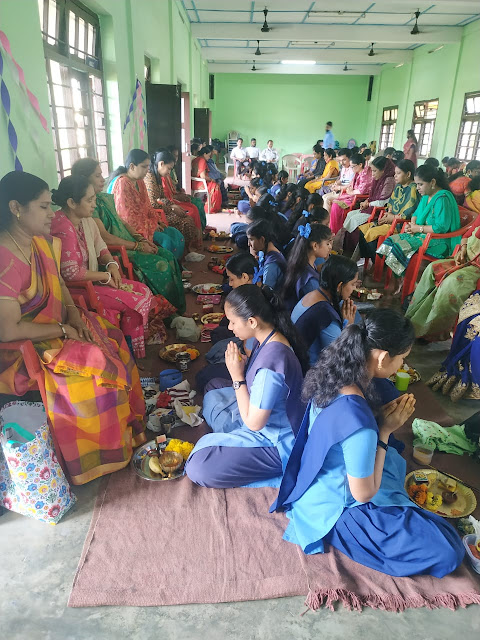 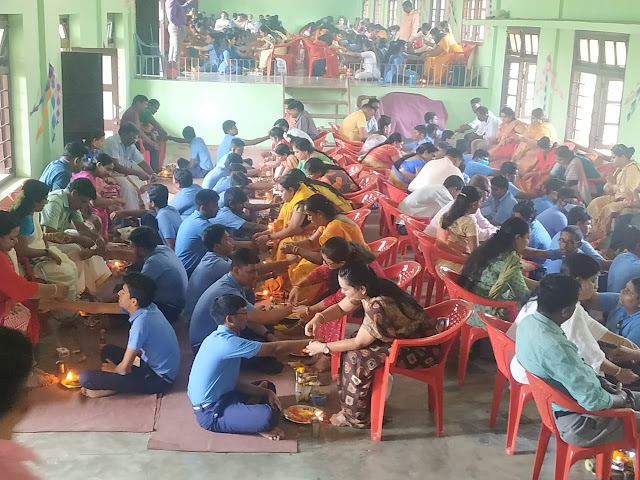 Shri S Vijayakumar,( Principal) addressed the students and parents. He clarified the students about the value of unconditional love of mothers. He advised the students to consider their mothers as the living goddess. He also praised the mothers as the essential part in the family and the society. He congratulated the students who participated in the pooja. With the blessings of almighty, parents and teachers students of Class X collected their admit cards for the AISSE 2022 from the Head of the Institution after the pooja. 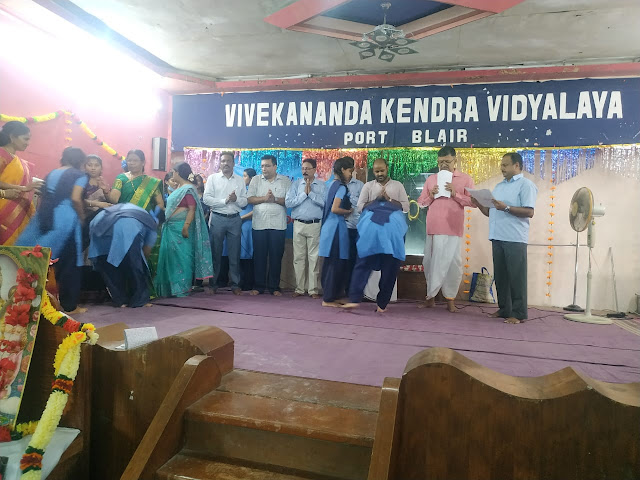 At the end of the programme prizes and certificates were awarded for the winners of various competitions held in the current session. 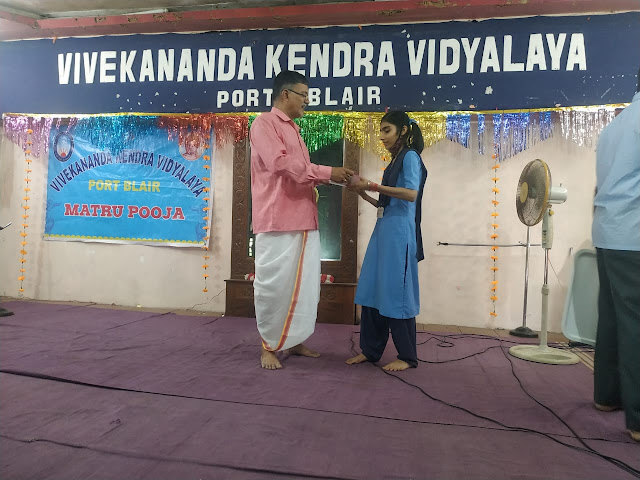 Vidyarambham ceremony for the students of KG I ( 2022-23 ) was held in VKV, Portblair  on 7th April 2022. 71 students with their parents attended the ceremony . 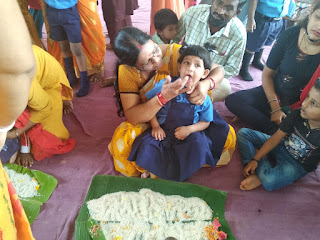 Vidyarambham pooja started at 8.30 a..m with welcome address by Shri. S Vijayakumar (Principal ). It was an enthralling moment when the Vidyarambham was started, Small tiny tots were blessed to start Education by their parents and teachers  present on the occasion. 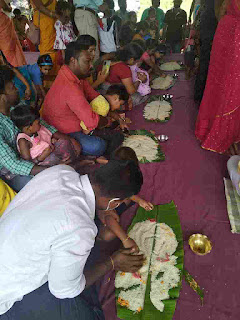 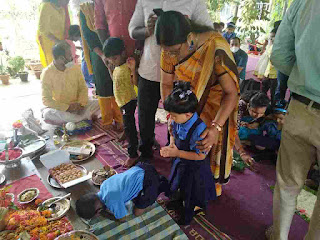 It was followed by mesmerising Bhajans. Prasad was distributed at the end of the Pooja, . parents and students cherished the auspiciousness of the day, especially on the first day of school.Program concluded with students group photography at 10:30am. 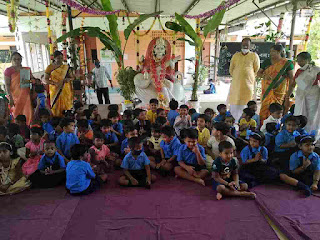 An awareness program on the ill effects of Alcohol and Drug  abuse was conducted by Social Welfare department and health department on 8 March 2022 in VKV Port Blair.

Mr V M Roy Nodal Officer, Mr Yousuf Health Educators, Smt Kanchan Supervisor ICDC, advised students to be aware about how it  has got spread in the society and to be away from it. Mr R Prem Kumar Nodal officer, Prohibition, Social Welfare interacted with students and answered all their queries.

He insisted students to be cautions with the ill effects of Alcoholism and Drugs and be aware from it to be good  to family society and country. The program was highly informative and useful to all.
at 21:57 No comments:

VKV PORT BLAIR: An interaction session with Dr. Pratibha Athavale, Dentist, Social Worker and Writer and Smt. Anita Thambe was held in the school assemnly hall on 26th February, 2022. 66 students with 37 teaching staffs were present for the programme. The program started with Manglacharan. 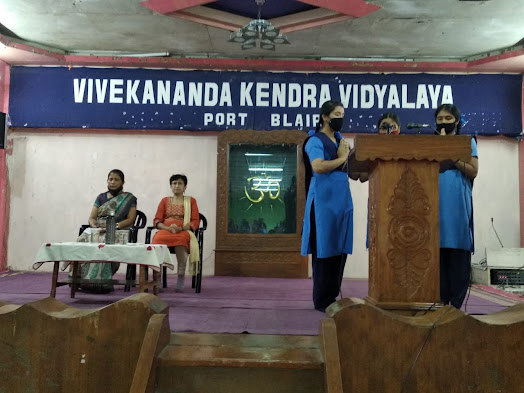 Dr. Pratibha Athavale briefed about the physical hygiene. She also highlighted the menstrual cycle and reproductory system in women's / girls' body. She explained the importance of healthy diet day-to-day life. 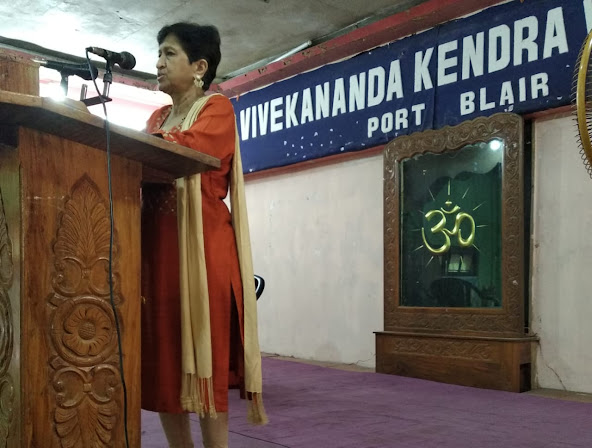 She emphasized on how to be physically, spiritually, emotionally and mentally strong. Then she briefed about the importance of education and also advised to take care of their teeth. At last, she answered the questions raised by the students and teachers. 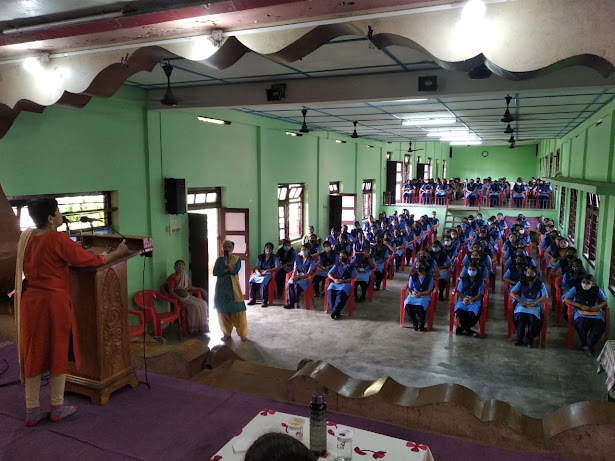 The programme concluded with Shanti Mantra.
at 15:35 No comments:

VKV Port Blair : An interaction session with Dr. Marda Ghanashyam Madangopal, Research officer, Ayurveda Research Institute, Pune was held in the School on 23 February 2022. 145 students with 20 teachers were present in the program. The program started with Manglacharan. The school Principal S. Vijayakumar presented the welcome address. Dr. Marda Ghanashyam Madangopal,  highlighted the importance of having healthy food and healthy life style to have good life. 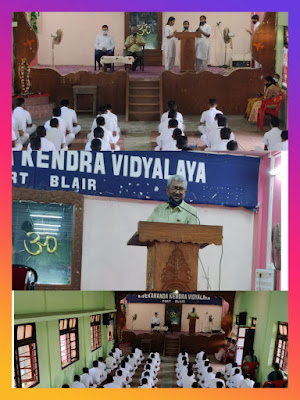 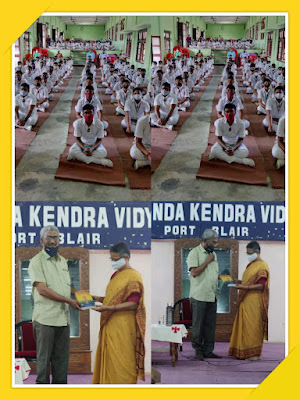 He suggested the daily routine and food habits needs to follow for maintaining good health. Further he clarified the queries regarding health issues and habits from the participants. The programe concluded with vote of thanks by Smt  Archana Gupta ( Vice Principal) and Shanti Mantra.
at 22:11 No comments: 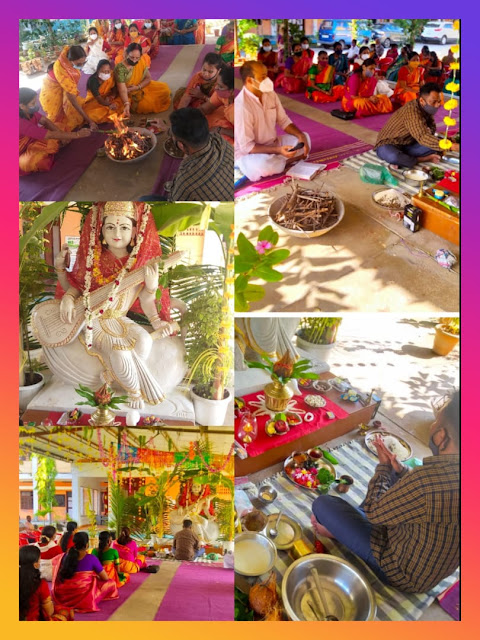 Vivekananda Kendra Vidyalaya, Port Blair, celebrated the 73rd Republic Day with immense patriotic fervour and zeal in the school campus. Varsha didi the Secretary of Vivekananda Kendra Vidyalaya, Andamans, Shri Vijayakumar Principal of VKV, Port Blair, Smt (Dr) Archana Gupta Vice-Principal with 43 teachers were present on the occasion. This program was facilitated through the online platform to enable students to participate in the program. A plethora of activities was organised to infuse the spirit of unity, brotherhood and patriotism among the students. 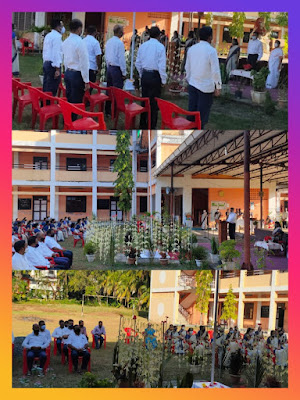 The teachers of the school presented soulful Bharath Mata ki Aarti and flowers were offered to pay tribute to Bharat Mata and to celebrate this monumental day. 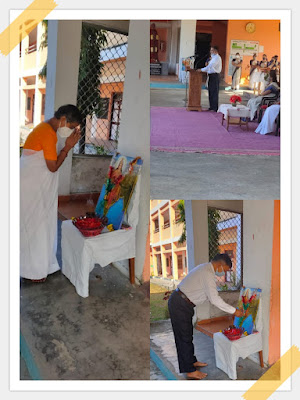 The School Principal, Shri S Vijayakumar inspired the gathering with his motivational words and told all students to remember the great legends and to abide by the constitution of their motherland to fulfil all their duties as responsible citizens. The program concluded with the rendition of the Shanti Mantra followed by a video on the National War Memorial. 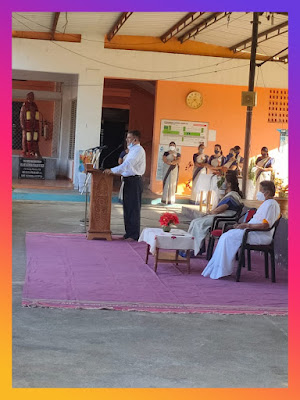 In order to honour and remember Netaji's indomitable spirit and selfless service to the nation, the government decided to celebrate his birthday on the 23rd day of January every year as Parakram Diwas to inspire people of this country, especially the youth, to act with fortitude in the face of adversity as Netaji did.

This year is the 125th Birth Anniversary of Netaji Subhas Chandra Bose.  To honour and remember Netaji’s indomitable spirit and selfless service to the nation, here is 👆a small presentation from the VKV family. 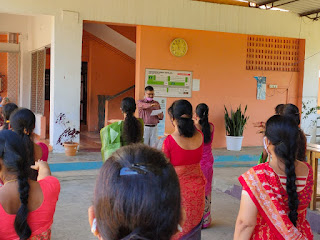 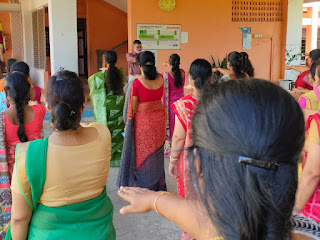 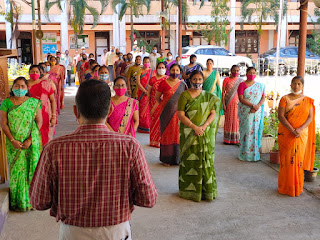